A Beautiful Mind – Think Right , You Can

Destroy Your Problem From The Root With The Fire Of God

Attract Your God Ordained Spouse With The Fire Of God

Message about the importance of attracting your God ordained spouse by walking in the Spirit, being filled with the Spirit and having the fire of God in your aura.

Vision about being active in praise and worship during Church worship sessions.

Visions And Revelations -The Earth Looks So Filthy!

A vision of seeing the earth from the spirit world and it looked really filthy!

This video message is about a revelation from the Lord about persistence and why you should persist and be a Christian warrior. I hope it shows on the reader. I have noticed that some of my videos do not show on the WordPress reader but show on the website.

They Are Pretenders, They Are Not Christians

In this vision the Lord took me into a Church. In that Church, I saw some of the people that write awful things and comments on social media. They were part of the congregation. These were people that openly supported and urged the killing of people that were not of the same tribe, race, ideology, religion and belief system like themselves. I was very shocked to see them in Church and I exclaimed, “ Lord, are these not the same people that openly support and encourage the killing of people who are different from them on social media!”

The Lord replied me and said, “don’t mind them – they are pretenders, they are not Christians.” I was very shocked and came out of the vision. If you really think about this you will realize that no true Christian will support any form of injustice or killing. My spirit was shocked because I could not reconcile their words and actions with their presence in Church as Christians. But the Lord eased my confusion with clarity and truth – they are not Christians.

He said “don’t mind them” because He does not want us to pay attention to their words, actions and works and be confused, deceived or discouraged.

Nevertheless, God’s solid foundation stands firm, sealed with this inscription: “The Lord knows those who are his,” and, “Everyone who confesses the name of the Lord must turn away from wickedness.” 2 Timothy 2:19

Brethren, the Lord truly knows the pretenders and the real, the true and the false, the original and the fake, the authentic and the counterfeit. He knows those who are His and who belong to Him. If you live your life in hatred and still believe that you are a Christian, then I feel very, very sorry for you.

Do you know why? It is because that is the worst form of self deception and it is the type that leads to death, hell and the grave. Heaven and Hell are very real and unfortunately, some people who think that they are Christians simply because they mention, mouth and do lip service to the name of Christ will be deceived and disappointed.

They will go to hell if they don’t repent and it won’t be God’s fault. That is the word of the Lord. God did not disappoint them – they disappointed themselves with hatred. God’s grace is greater than sin and hatred and it is available. The only thing we need to do now is to choose love and reject evil and hatred.

Our fruits and works will always be an evidence of what we believe and worship. It does not make sense hiding under the canopy of Christianity and misusing the name of Christ yet be full of the worst form of abomination, wickedness, evil, greed and hatred – it does not make any sense. No amount of hiding, pretense and self deception will save us from judgement. God sees every form of pretense by man. He wants every man to be saved but we must choose good and reject evil.

The heart of man is very wicked and deceitful. We have to constantly pray against every form of self deception.

What I took away from this vision is that:

May God’s great grace be upon us and lead us always. May we always bear fruits to the glory of God. Amen.

Your Cry For Mercy Will Not Be Denied

The Lord has heard our cries for help and mercy. He will defeat our enemies and crown us with deliverance.

For the director of music. With stringed instruments. According to sheminith. A psalm of David.

1 Lord, do not rebuke me in your anger
or discipline me in your wrath.
2 Have mercy on me, Lord, for I am faint;
heal me, Lord, for my bones are in agony.
3 My soul is in deep anguish.
How long, Lord, how long?

4 Turn, Lord, and deliver me;
save me because of your unfailing love.
5 Among the dead no one proclaims your name.
Who praises you from the grave?

6 I am worn out from my groaning.

All night long I flood my bed with weeping
and drench my couch with tears.
7 My eyes grow weak with sorrow;
they fail because of all my foes.

8 Away from me, all you who do evil,
for the Lord has heard my weeping.
9 The Lord has heard my cry for mercy;
the Lord accepts my prayer.
10 All my enemies will be overwhelmed with shame and anguish;
they will turn back and suddenly be put to shame.

You Are The Reason

We cannot live without His grace ​ 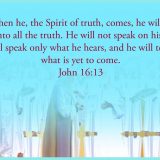