Can turn my life

The way you do

I love the way

The Lord will deliver us

You purchased for us

By the blood of Jesus

Prayer for Deliverance from Enemies

To the choirmaster. A Psalm of David.

13 How long, O Lord? Wilt thou forget me for ever?
How long wilt thou hide thy face from me?
2 How long must I bear pain[a] in my soul,
and have sorrow in my heart all the day?
How long shall my enemy be exalted over me?

3 Consider and answer me, O Lord my God;
lighten my eyes, lest I sleep the sleep of death;
4 lest my enemy say, “I have prevailed over him”;
lest my foes rejoice because I am shaken.

5 But I have trusted in thy steadfast love;
my heart shall rejoice in thy salvation.
6 I will sing to the Lord,
because he has dealt bountifully with me.

Never presume that you will fail tomorrow, simply because you failed yesterday and today. The past does not determine your future. Leave the past with its mistakes and failures behind and look forward to a brigher tomorrow.

God can change your tomorrow and He wants to. He has forgotten your past and washed it with the blood of Jesus. God never sees failures and mistakes for the repentant. He sees possibilities.

Cling to God with all

And in bad times

To be a fighter

Have faith in Him

Have hope in Him

If you fall in life

The floor is not your bed

Neither is it you pillow!

If you fall in life

By the grace of God

It is not by power

But by God’s grace

His grace is constantly

Cling to God and never let go. He is the only one that can help you and He is willing to help you. We all need help and we all fall sometimes. The difference is that some are determined to get up and rise and some make the floor their new home and comfort. The truth is that God hates hopelessness and lack of faith. He can make our hope grow to maturity by the power of the Holy Spirit.

May God, the source of hope, fill you with all joy and peace by means of your faith in him, so that your hope will continue to grow by the power of the Holy Spirit. Romans 15:13

All we need to do is to depend on God in absolute surrender. The flesh can never help.

May we always rise up after every fall in Jesus name.

Prior to the vision, I had spent the day and night in praise and worship, and meditation of scriptures, especially the good news of salvation, given to us by Jesus. In the middle of the night, I meditated on the scripture below, for a long time – more than three hours. Throughout the night, that Scripture was my companion and delight.

To Him who loved us and washed us from our sins in His own blood, and has made us

kings and priests to His God and Father, to Him be glory and dominion forever and

While meditating on this scripture, I was saying in my heart,

“To Him who loved me and has washed me from my sins in His own blood, be glory, praise, worship, honor and thanksgiving.”

While saying this, I fell into a trance.

In this vision, I was walking along a path and a song bubbled up from my spirit to my mind. The song is part of a popular hymn.

The pilgrims of the night

Then I as walked further on, I was immediately caught up in the glory cloud of God with great force. I found myself high up in the heavens and then I saw them – thousands and thousands of glorious, beautiful angels descending from Heaven. They had wings.

Several times that I had seen Angels in the past, they did not have wings but few times that I saw them, they had wings. However, I had never seen them in thousands at the same time. I noticed that they were translucent and emitted light. A heavenly sweetness washed over me just at the sight of them, and I was filled with joy. Then I kept going up into the heavens and at a point I thought to myself, “maybe I’m dying and never going back to earth.” At that thought, I became uncomfortable with going further into the heavens. Then I came out of the vision.

The song is not a funeral song but some humans turned it to one. God was trying to speak to me through the song but my limited human mind could not understand. He wanted to show me His beautiful Angels!

Angels are real! God is real and heaven is real – Glory to God!

It is important to note that in my prayer time, I was rejoicing in Christ, and I was thanking and praising God, for His mighty and great salvation.

Faith, praise, worship, and thanksgiving were all present. That is what God loves.

May God help us to worship Him always, with praise, thanksgiving and gratitude, even as we present our requests to Him, and obey Him.

You were the ocean

And tore me apart

Swim in my new ocean

That will restore me

The Holy Ghost is our new wine

He will heal us and restore us

If we open the door

And let Him in

He will eat with us

And we will eat with Him

Regardless of our past

And damaged we are

Of all the pains

The Holy Ghost is bigger!

And will fix us

He is the living water

The deep calls me

That it is only

The grace of God

The four living creatures, each having six wings, were full of eyes around and within. And they do not rest day or night, saying: “Holy, holy, holy, Lord God Almighty, Who was and is and is to come!” (Revelation 4:8 NKJV)

The four living creatures at the throne of God do not rest day and night as they praise and worship God, declaring His holiness. Do we have that attitude? Do we have an attitude of praise, worship and thanksgiving?

God loves praise, worship and thanksgiving. He keeps reminding me about the need to constantly worship, thank and magnify Him. Several times, He has said to me, “ Give me my food.”

What a mighty and holy God we serve! All He wants is faith, worship, praise, thanksgiving and obedience. He never asked for any sacrifice. Idols are so cruel and ask for human blood, glory and flesh. Our God is so Holy that all He wants from us, is for us to worship Him and love one another.

May we become very grateful and loving children of God. May we always worship Him day and night as often as we can by giving Him His Holy food. 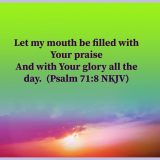 Give Me My Food 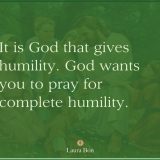 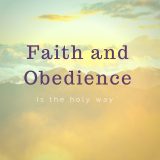 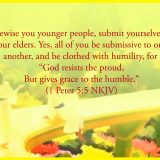