In this revelation, the Lord said to me,

“All that matters in life is power. It is power that defeats power, and people with less power are always slaves of people with higher power. “

Could Jesus and Paul have been effective without power? No. Jesus came to manifest the power of God. The love, mercy and kindness of God are demonstrated by His power. The Church of Jesus Christ has so much underestimated and undervalued the power of God. This is mostly because of false doctrines, especially the doctrines about confession and claim it.

It is the power of God that delivers and heals, not our confessions. Confession can only be secondary after power. When there is power, you decree a thing and it comes to pass. As a prophet, when I am in the Spirit, I decree and before my very eyes, the decree comes to pass physically. Usually, I decree what the Lord moves me to decree, not what my selfish human self wants. I decree in line with the will of God. This is by grace and the power of Christ. When I am not in the Spirit, I do not decree. I humbly seek God’s face and ask. I present my petitions to God and wait upon Him.

Minister’s should be anointed with the power of God to heal the sick and deliver, but many lost the way and started sowing the false garments of Adam and Eve to cover their nakedness and believers nakedness. It did not work. Only the glory and power of God can cover our nakedness. So many in the church are still naked without the power of God.

You say, ‘I am rich; I have acquired wealth and do not need a thing.’ But you do not realize that you are wretched, pitiful, poor, blind and naked. Revelation 3:17

Our confessions should not be used as mantra, like the way pagans do confessions and enchantments. What believers don’t know is that those pagans have demons and powers attached to their aura and are given specific words and confessions to activate and make the powers perform magic for them anytime, anyhow and anywhere. That is called enchantment, magic and sorcery. Sorcerers exist but the power of God is supreme.

But Elymas the sorcerer (for so his name is translated) withstood them, seeking to turn the proconsul away from the faith. (Acts 13:8 NKJV)

and said, “O full of all deceit and all fraud, you son of the devil, you enemy of all righteousness, will you not cease perverting the straight ways of the Lord? And now, indeed, the hand of the Lord is upon you, and you shall be blind, not seeing the sun for a time.” And immediately a dark mist fell on him, and he went around seeking someone to lead him by the hand. (Acts 13:10-11 NKJV)

When Simon saw that the Spirit was given at the laying on of the apostles’ hands, he offered them money and said, “Give me also this ability so that everyone on whom I lay my hands may receive the Holy Spirit.”

Peter answered: “May your money perish with you, because you thought you could buy the gift of God with money! You have no part or share in this ministry, because your heart is not right before God. Repent of this wickedness and pray to the Lord in the hope that he may forgive you for having such a thought in your heart. For I see that you are full of bitterness and captive to sin.”

Then Simon answered, “Pray to the Lord for me so that nothing you have said may happen to me.”

We should definitely not imitate pagans and their ways – they should be the ones to see the power of Christ in us and then, become like us and imitate us the way we imitate Christ. We might not be manifesting the power of Christ now, but as long as we acknowledge that we need it and desire, hunger, thirst and long for it by seeking His face, we are on the right track.

All those new age doctrines and quick fixes that entered the church actually ignore truth and reality and promote self exaltation and worship. Self worship is satanism. Confessions without seeking the grace and power of God is error. Was that the doctrine of Jesus and Paul? No. They magnified and acknowledged the power and grace of God. Great grace was upon them. Everything has a place. The word of God has its place and the glory and power of God has its place. They represent different spiritual realities. You have to be filled and cleansed with the word of God in complete submission to the ways and word of God before the power of Christ can rest upon you.

A believer can be put under a spell by evil people if they are naked and devoid of power. However, Christ as head of all principalities and powers permits the act. Power is what controls and defeats power in the spirit world. Annointing breaks the yoke and it is not by power or might but by the Spirit of God.

The kingdom of darkness understands this principle all too well so you will see them going all over the place seeking more power. When a witch doctor cast a spell on them they look for another witch doctor with higher power and the latter breaks the spell. We are forbidden as Christians to visit witch doctors and false prophets because they have partnered with death, hell, the grave and destruction to get power. They offer human sacrifice to obtain power so it is an abomination to partake of blood.

What we need to do is to wait upon the Lord and seek His face until He manifests His power. When His power descends your captivity and bondage will be over.

Power is the only thing that can defeat power so run into the arms of grace today for the power of God to heal and deliver you. He is waiting for you to meet Him at the secret place of prayer.

Laura Bon posted a video to playlist Word Of God.

Message about the importance of loving righteousness and hating sin and evil. 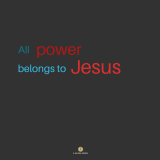 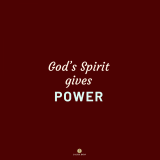 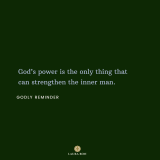 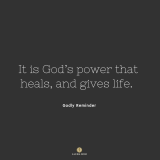 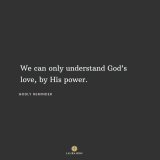