Nor complain, as some of them also complained, and were destroyed by the destroyer. (1 Corinthians 10:10 NKJV)

What you see is what you get. If you keep entertaining false thoughts about God, that kills your faith and paints a wrong picture about God. It paints a wicked and bad picture of God in the mind and that darkness eventually destroys. It is simply basic intelligence for man to know that His creator loves Him and cannot hate Him. But when man keeps thinking evil against God, they eventually reject God and become God haters.

They are gossips, slanderers, God-haters, insolent, arrogant and boastful; they invent ways of doing evil; they disobey their parents. Romans 1:30

What else can God do when man hates Him and pronounces the judgment of not worthy of worship, obedience, praise and thanksgiving against God. God will keep waiting for that man to change but if he refuses to change and dies in that state, he will be lost forever.

To the pure, all things are pure, but to those who are corrupted and do not believe, nothing is pure. In fact, both their minds and consciences are corrupted. Titus 1:15

The lazy servant in the parable of the talents accused God of being a hard man that reaps where he did not sow. Typical. Lazy, irresponsible people always look for who to blame and many of them typically blame God for everything wrong in the world and never blame themselves for anything. They conspire with each other and with demons against God but that is an attempt at futility. Their conspiracies come to an end when they die and come face to face with God whom they regarded and treated like an enemy, who kept loving them and whom they kept hating.

If God haters can connive and see a way to dethrone God and overthrow Him they will. In their minds they have already overthrown Him and He is not their Lord or Ruler. They are ruled by death because the only god that exists outside God and life is death.

To the pure all things are pure and to the evil, good things are evil. Those who are impure and polluted can never discern between good and evil. Evil looks like good and good looks like evil. They are that way because their eyes or minds have been blinded and they are not capable of seeing or discerning clearly. It is a form of spiritual madness. When one looses his spiritual senses, everything will be upside down and their spiritual reasoning, judgement, intelligence or logic will be very poor or flawed. They are that way and they typically believe that God lovers and worshippers are not intelligent or have low I.Qs. Some Atheists have said that to me with so much pride and arrogance. However, I was meditating about my enemies and evil people some years ago and the Lord said to me, ‘they have low I.Q.’  After He said that to me I was no longer angry with my enemies but I prayed for them to have wisdom. They are simply weak and need grace and help.

Jesus said to them, “You are still no more intelligent than the others. Matthew 15:18

The disciples did not understand any of this. Its meaning was hidden from them, and they did not know what he was talking about. Luke 18:34

Then their eyes were opened and they recognized him, and he disappeared from their sight. Luke 24:31

Spiritual intelligence is different from physical intelligence. Someone can have all the intelligence and brilliance necessary to create and invent great things with high academic and social excellence yet be spiritually very unintelligent.

Eve was deceived into thinking that God did not want good for her and Adam. The Bible says that Eve was deceived. Adam was not deceived according to 1 Timothy 2:14. His wife simply seduced Him and love and protection took over. If he did not join his wife in her error, Eve would have died alone. Do you see why Jesus is the second Adam that died for the Church.

Adam failed but he had undying love for his deceived wife. He went along with Eve because of the love he had for her. Men were naturally created to be men who can die and fight for their wives. Unfortunately, a lot of men are too weak, timid and afraid to have undying, selfless, sacrificial, protective love for their wives.

Either way, Adam sided with Eve against God. We must never love our spouses or children more than God because God is our first love and sustains our lives. He loves us more than anyone else.

And Adam was not the one deceived; it was the woman who was deceived and became a sinner.1 Timothy 2:14

That is the sin of unbelief or lack of faith. She did not trust God or have faith in her creator. God had already told them that they would die if they ate that fruit. It was for their own good and God was shielding and protecting them from evil. However they did not believe the word of God that said they would die. Satan convinced Eve that God was lying.

That is the general sin of humanity today. Humans believe that God’s word cannot be trusted and they have no faith in His good news of redemptions and His laws. They think that God does not want good for them and keep complaining against God. That is why the Bible says that all have sinned and fallen short of the glory of God and humanity is naked and guilty before God.

We must all get back to the place of virginity, purity and innocence which is a place of complete faith, trust, love and hope in our creator. Because man lies, he thinks that God can lie but God cannot lie. In man’s impurity he thinks that God is like him and sees God through the lens of his weaknesses and impurity.

“For God knows that when you eat from it your eyes will be opened, and you will be like God, knowing good and evil.” Genesis 3:5

Eve wanted to be equal to God and thereby accused God of evil. However, Adam and Eve were already as good as they could be. God had blessed them and made them the best that they could be but she wanted more. Now, the whole of humanity is scrambling to get back to the way that Adam and Eve were in the garden of Eden. She thought there was something better out there that God was keeping and hiding from them but there was none. The only other thing out there that God shielded them from was knowledge of evil. They already had knowledge of good. Eventually, they knew evil and regretted it.

We must keep our minds pure and not be like Eve. We must stop complaining against God and realize that He is the good and perfect one and man is the one that is evil and tainted. Instead of complaining, we must practice thanksgiving, worship, praise, love, faith and trust. We must cling to God and ask for help with thanksgiving and faith instead of making it look like God is the cause of our problems by complaining against Him.

May God give us more insight into His perfect love and redemption so that we will always thank Him and magnify Him.

Examine Yourselves As To Whether You Are In The Faith 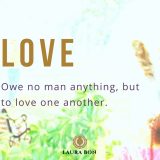 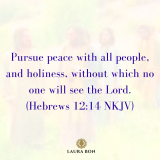 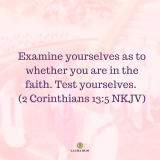 Examine Yourselves As To Whether You Are In The Faith