Everything That We Have

For I say, through the grace given to me, to everyone who is among you, not to think of himself more highly than he ought to think, but to think soberly, as God has dealt to each one a measure of faith. (Romans 12:3 NKJV)

Let the lowly brother glory in his exaltation, but the rich in his humiliation, because as a flower of the field he will pass away (James 1:9 – 1:10 NKJV)

For no sooner has the sun risen with a burning heat than it withers the grass; its flower falls, and its beautiful appearance perishes. So the rich man also will fade away in his pursuits. (James 1:11 NKJV)

The faith that we have

The grace that we have

The ministry that we have

The gifts that we have

The riches that we have

The education that we have

They beauty that we have

The fame that we have

Everything that we have

Both spiritually and physically

We must never ever consider ourselves

Better than anyone else

Based on spiritual or physical blessings.

Paul says we should think of others

As better than us.

Let nothing be done through selfish ambition or conceit,but in lowliness of mind let each esteem others better than himself. (Philippians 2:3 NKJV)

Our joy will know no bounds

As soon as we learn to respect and value

God Himself does not judge

By outward appearance and looks at the heart.

We must stop thinking that we are better than anybody else.

For if there should come into your assembly a man with gold rings, in fine apparel, and there should also come in a poor man in filthy clothes,and you pay attention to the one wearing the fine clothes and say to him, “You sit here in a good place,” and say to the poor man, “You stand there,” or, “Sit here at my footstool,” have you not shown partiality among yourselves, and become judges with evil thoughts? (James 2:4 NKJV) (James 2:2 – 2:3 NKJV)

Even if we can see the heart, that would still not be enough reason

To judge who is inferior or superior.

Everything we have comes from the grace of God. They

Are all blessings so, we must

Always think of others as better than us.

We must realize that every man has dignity

And was created by God in His image. That reason alone is enough

God has given him.

We must never exalt people based on physical or spiritual blessings.

Must reject the ways of the world. 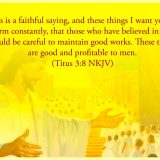 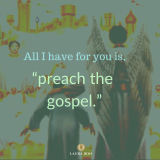 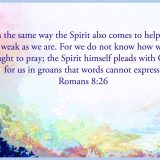 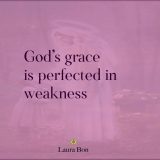